We believe that social justice is not possible without gender justice. Much progress has been made in the debate about gender equality in Mozambique. Today, women are in responsible positions in politics and in the economy, have better access to education and the labour market, and are thus gradually attaining financial independence.

At the same time, however, female representation in parliament does not automatically translate into gender-just policies and laws, as the long-term debate on a decent maternity leave regulation shows.

The transformation of discriminatory power structures and social norms is thus an important work line for FES Mozambique. Together with partners like Forum Mulher and Women and Law Southern Africa (WLSA) Mozambique, we are offering spaces for reflections about feminist concerns, be they the care economy, gender-based violence, or reproductive health, but also for feminist critique of the patterns of development and democracy.

On the regional level, FES Mozambique is part of a feminist reflection group that wants to rethink development and political participation in a transformative way. 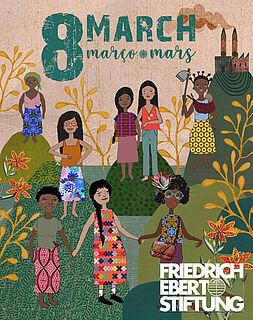 The case of Mozambique
Maputo, 2021

The role of women in the conflic in Cabo Delgado